Alain Ruelloux: as good as new 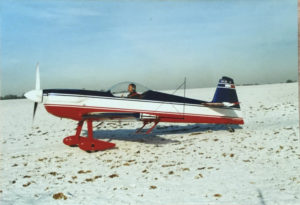 What do a Mirage IV fighter jet and a DR 401 have in common?
Well, to us, it appears they have Alain Ruelloux.
And to Alain Ruelloux, they have everything in common above thirty feet in the air. The danger is the same, only the speed differs.
The man knows what he’s talking about. He flew dozens of each, and hundreds in between. He went from squadron commander in the Air Force to « deluxe-handyman » in Darois, having fun with all types of wing profiles and horsepower along the way. Now retired, he tells us all about it fro and through, going from a Mach2 plane to a 120hp without changing his vocabulary or his attitude.
It seems that, to him, all flying things are the same matter: a matter of pleasure.

Alain is no snob. He’s not an elitist and certainly not a purist. What does that make him, then? Well, a sheer sky enthusiast, madly in love with everything that can take him there.
But with all his experience, despite having broken through the sound wall back and forth hundreds of times, despite having sometimes made the stratopause his highway to heaven, he never once thought of himself as being above the basic laws of physics. In fact, he knows all the more that the laws up there, more than anywhere else on earth, are exactly the same for everybody.
He respects the air like an old sailor fearfully observes the laws at sea. He actually says, before anything else, that the more he knows, the better he understands that he knows nothing yet.

As a young pilot, sitting on the grass of Rennes.

In 1972, after his first thousand hours in flight between his sixteenth and nineteenth birthday, he joins the French Air Force and starts his training. Under the supervision of an older but less experienced pilot, he encounters for the very first time the dashboard of a… CAP 10B.
Destiny has its ways. Twenty-five years later, he would leave the army as a colonel to become a co-director at CAP Aviation, freshly resurrected by Robin Aircraft.

His promotion at the piloting academy of Aulnat, 1972.

Here’s for an apéritif. Let’s now move on to the rabbit-of-the-garden civet that his wife Sylvie prepared with love. She is carefully listening to everything that is said, as if hearing it for the first time, and prompting him on the rare occasions his memory withholds a detail or a date from him.

First things first, Alain tells us about his first break trhough the sound wall over Noirmoutier. The brutal variation of pressure in his ears, the sudden inversion of the aerodynamics logic and the feeling of entering a new world can all be pictured clearly with the mouth sounds, hand gestures and faces Alain makes. Those emotions are without a doubt still very lively.  Many missions will follow aboard Mystères jets and Mirages, covering « ground » from Norway to Zaïre. He tells about those off the record and with a nice touch of playfulness. The memories of the many training exercices he engaged in are also very vivid. They often consisted in « tickling » the soviet defense lines without getting fired at. The scoreboard that pilots kept between them consisted of the number of occasions on which their aircraft had been « locked » by a missile within a single exercise . They only knew about the score when they got back to base safely. In any other case, it meant you had been « locked » for too long and, as Alain puts it, the exercise had ended with: « TZZZZZZIZIT… PTAOUUUUUUUUUUUUUUU… BOUM! »
Anyway, Alain obviously can tell a story. Especially when he can add, with a smile, his own twist of humble realism to the myth of the over-trained air force athlete that everyone else carefully maintains.
To him, all pilots are doing the exact same thing, only with different planes.

In 1992, in white gloves and red decorations, Alain poses in front of the Mirage IV, along with all the other squadron commanders on the occasion of the fiftieth anniversary of the Bretagne Group.

But the main question stands unanswered: how did an Air Force colonel that on many occasions carried « de Gaulle’s big bomb » end up at Robin?
Well, he wanted a change of scenery, says he.
Alain is flexible. Elastic so to speak. Nothing seems too much or too little to him. Except maybe that « thing the size of a rugby ball that weighed twenty times Hiroshima ».
He seems to fear nothing and simultaneously respect everything. His pilot of a wife said so herself earlier: « he never takes any plane or any flight lightly, however light or short it may be. »
Talking about taking things lightly, Alain switches from the number of liters a Mirage can carry to the numbers of kilos they got out the garden cherry trees this year. Feet on the ground and head on the shoulders, all right.

Which brings us to the second part of his life. During his army years, Alain covered a large portion of the earth without ever stepping on it. On the contrary, he always remained faithful to his native land. Just like Robin Aircraft. Birds of a feather flock together… 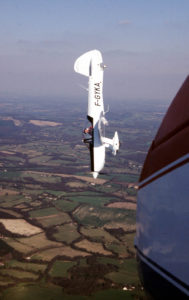 Alain is what some call a dive-hard.

To make a long story short, he landed in Darois in September 1997 to join his brother-in-law Dominique Roland, who was running CAP Aviation.
For three years, Alain worked on the other side of the famous route de Troyes, demonstrating the no-less-famous CAP 232, whilst also developing the newest version of the CAP 10 along with the CAP 222 which will after all never get certification. A bump in the road, some would say. A mild turbulence, it seems to Alain, before crossing the route the Troyes to manage the Robin workshops for six months. A new « command » for the retired colonel, and an exhilarating human experience with that.

But those earthly responsibilities keep him away from what he knows and loves best: and that is, of course, flying.
Free-spirited but loyal of character, he then became a real « swiss-army knife » at Robin. He test-pilots and sells planes. He even takes part in designing matters on occasions. He reminisces over that time with a special kind of nostalgy, the kind that makes all memories look good. To sum it up, it was both highly demanding and unexpectedly improvisational. The type of freedom not many jobs can provide.
During all his years at Robin, every plane that got out of the workshops did so only through his hands. He tested it and adjusted it to the buyer’s standards. 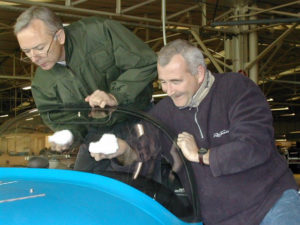 Preparing a test-flight in 2003, with Philippe Monot, now head of the assembly workshop.

Some CAP 232 test-flights, he says, were like breaking-in a mustang horse. Those aerobatic machines, very powerful and extremely agile, sometimes needed to be tamed mercilessly so as to deliver them in perfect flight conditions. He sums those operations up with a cringe, his two hands on an imaginary stick, and then a « AAAAAAAH » of satisfaction, once the correction has been made at the factory.

Adjusting a CAP 232 of the moroccan “Green March”, whose leader usually dealt directly with him.

But subtlety and performance are not everything. Alain may love the CAPs, but he values the DRs just as much. Especially the 401 version. Those planes are magnanimous, he says, easy to control and with a confortable margin for error. Those planes widen the access to all kinds of pilots. Old or young, experienced or not, everyone always finds himself at home when sitting in front of a DR’s dashboard. To quote Alain directly « if this plane gets so much love, it’s because it is so reliable, because it makes everybody feel safe, like the machine was always on their side… »

After the cherry-cake, here comes coffee. Alain doesn’t drink any. Before his very first flight, the doc that got him through his first medical told him never to drink coffee or alcohol on account he seemed to have a high blood pressure. Maybe he was right then, but it’s kind of hard to believe now, given the state of total relaxation he has been in since we got here. Digressions are closely followed by bursts of laughter, exclamations don’t get any weaker along the long afternoon we’re spending with him… All in all, the life he’s telling us about seems to have been lived on a cloud that’s exclusively composed of silver linings.

And when it’s time to part ways, Alain now seems to be thinking out loud: « … it’s like riding a bicycle. Except a bike would never put up with the kind of landings I sometimes witnessed… And every time, the DR was still there, solid, ready to go again… Maybe it all comes down to wood. Wood has an unsuspected flexibility, if you must push it to its limits, you won’t hurt it. Metal has a long memory when it comes to shocks. It can be resentful, even vengeful… But wood forgives almost everything. Well it’s no wonder some wooden frameworks are a good five hundred years old… And it’s no wonder some Robins still fly after a good fifty! Robin is the emblem of the French light aviation. In a way, Robin represents France. »
How this last spontaneous speech makes us feel could only be summed up in one word: pride.

These days, Alain and Sylvie often leave their adoptive region of Touraine to fly over France and visit friends all over the territory aboard their precious ULM. Maybe it cannot travel from Britanny to Burgundy in sixteen minutes, like a Mirage IVp could, but there’s no comparison to the level of freedom they found between those two ultra-light wings.
And it’s precisely that open-mindedness that got Alain from one cockpit to another without ever mistaking power for hierarchy, and without ever forgetting the most important thing when in the pilot seat: enjoying.

Feet on the ground, mind on cloud nine.