At the bottom of the Darois assembly workshops, we can smell leather. There’s actually every colors, kinds and sizes of leather. The wide refined cow skins share space with all kinds of mosses, stuffs, metal structures, sewing threads and patterns to straighten all this out.

For most of us, it would look like a mess. But to Daniel, it’s all in order. 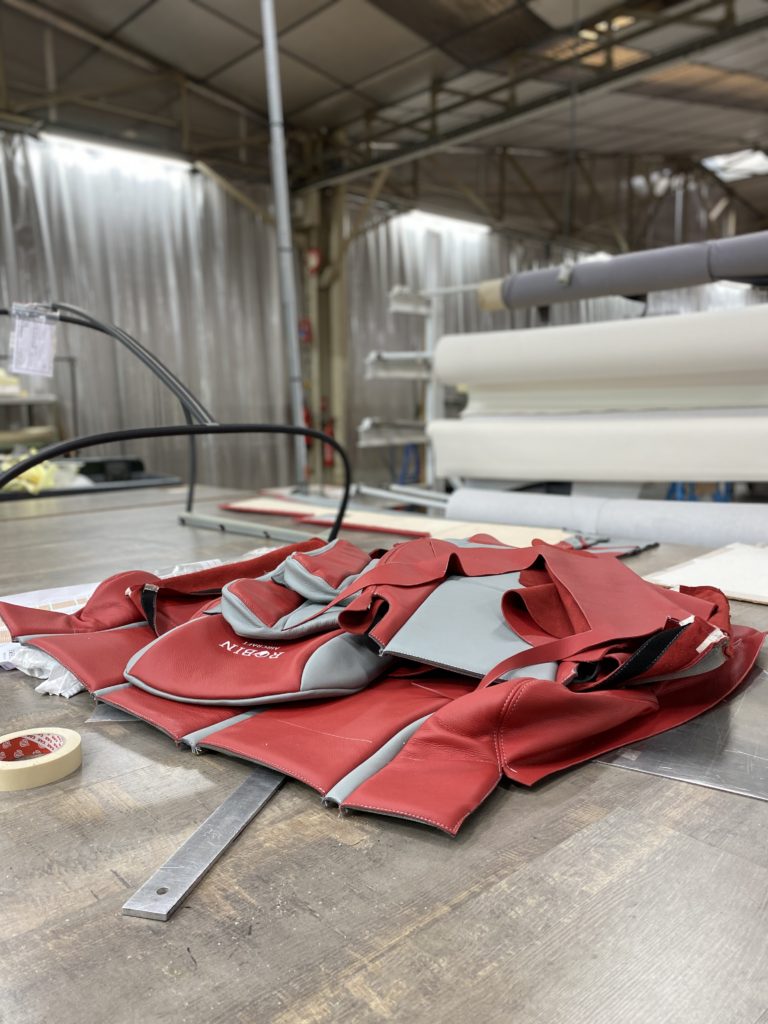 Just enough to make his magic happen, just enough to do his job as an « interior decorator » as he playfully calls it.

And Daniel can’t wait for us. As a upholster, he has a lot on his plate with the order book full as it is. He works fast. If we want to be able to follow his track, we’re going to jump on the bandwagon.

Friendly and composed, Daniel starts to explain how with so little he makes so much for our pilots’ backs and posteriors. Without even considering the aesthetics at first. And he does so without ever stopping sewing or cutting or scanning or gluing or even smiling.

His work starts upon the arrival of the metal frame from the workshop below. He first fits a dozen straps within the frame so as to make it look like a comfy deckchair. He then cuts two types of foams in many different sizes and shapes to garnish it with the right amount of thickness in every part of it. Not too little nor too much. When you talk about wooden planes, every gram matters.

Therefore, he uses denser foam for the seat than he does for the chair back, but both have open cell structures to guarantee optimal resistance to both time and rumps. Once all this is on, it does kind of look like a bare seat.

We can feel Daniel can’t wait to get serious. And the most serious thing there is for a upholster, is leather. To him, metal is metal, straps are straps and foam is foam. But leather is always more than just leather. Leather is skin. A skin with a life of its own. A skin he chose carefully and took care of ever since he got his hands on it. A skin that is destined to fit a plane as soon as Daniel will have applied his craft to it.

Daniel first works with his eyes, then with his hands. Most of the full-grained leather he chooses comes from Italy. Every single one of them is fully certified for aeronautics and scanned cautiously. Precisely like it’s done with wood in the Robin carpentry workshop, he checks his leather for faults, details, thickness variations or any type of irregularity he can spot. Everything must be perfect. Upholstery is first and foremost about beauty and there’s no makeup for this kind of skin. Daniel only wants the best for his planes.

Once the skins have been fully inspected, they’re set to be cut. Scissors in hand, Daniel will cut about forty pieces of leather in one skin. A plane needs about three skins to be fully « dressed », which makes about 12 to 15 square meters of leather.

Just like a tailor, Daniel dresses his planes one by one. Every interior he makes is unique.

There’s just no match, ever.

But let’s get back to the bare seat. Before having it try its brand new leather « jacket », Daniel has to sew padded reinforcements in it. This additional garniture will not only upgrade the pilot’s confort but will also muscle it up. 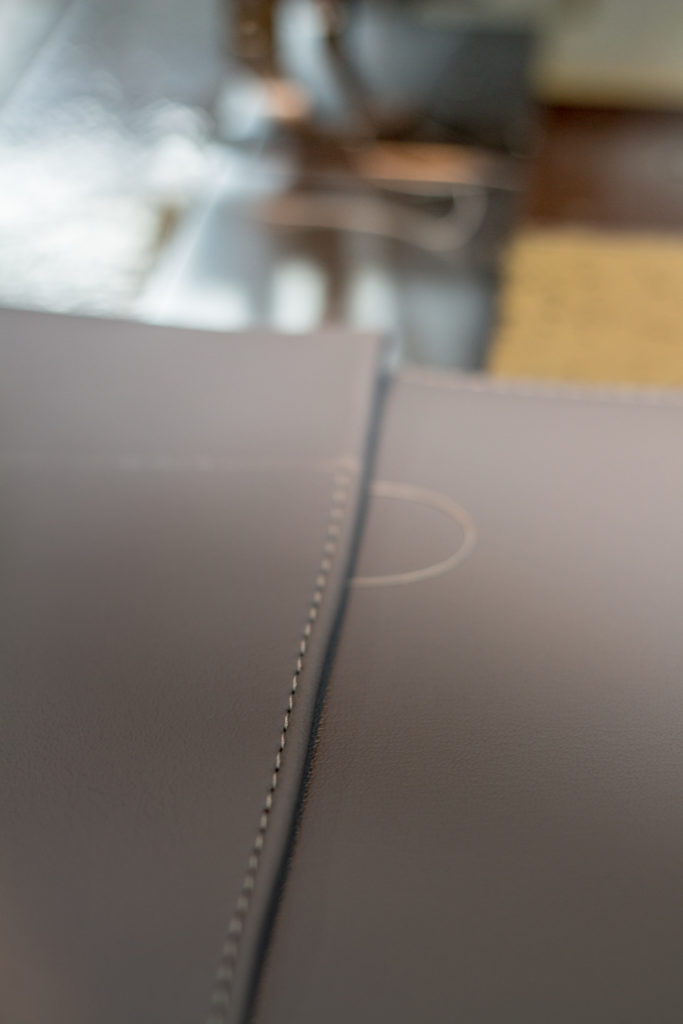 Therefore, sitting behind his Pfuff, an ageless sewing machine that has been dressing every Robin up for decades, Daniel starts to sew. His moves are precise, the sewing is straight and his eyes are unwavering. He swiftly assembles pieces together. He never seems to have to check his measures. Everything falls together. And soon, the leather is on and the seat and the seat comes to life. A nice light red and a clear grey, the seat is all set.

But there’s still the copilot and the back seats to dress. And then there’s the leather trim for the cockpit to do. A lot on his plate, we’re telling you.

So let’s trim. And Daniel admits it’s way simpler to dress the cockpit because there’s no sewing. So he sets up his glue gun and glues pieces of leather with metal parts, acting nevertheless with the same care he did for the seats.

There it is, everything is square, in order, there’s not a thread left to take care of.

What used to be a mess is now as tidy as an officers’ mess. Nothing is left to chance. 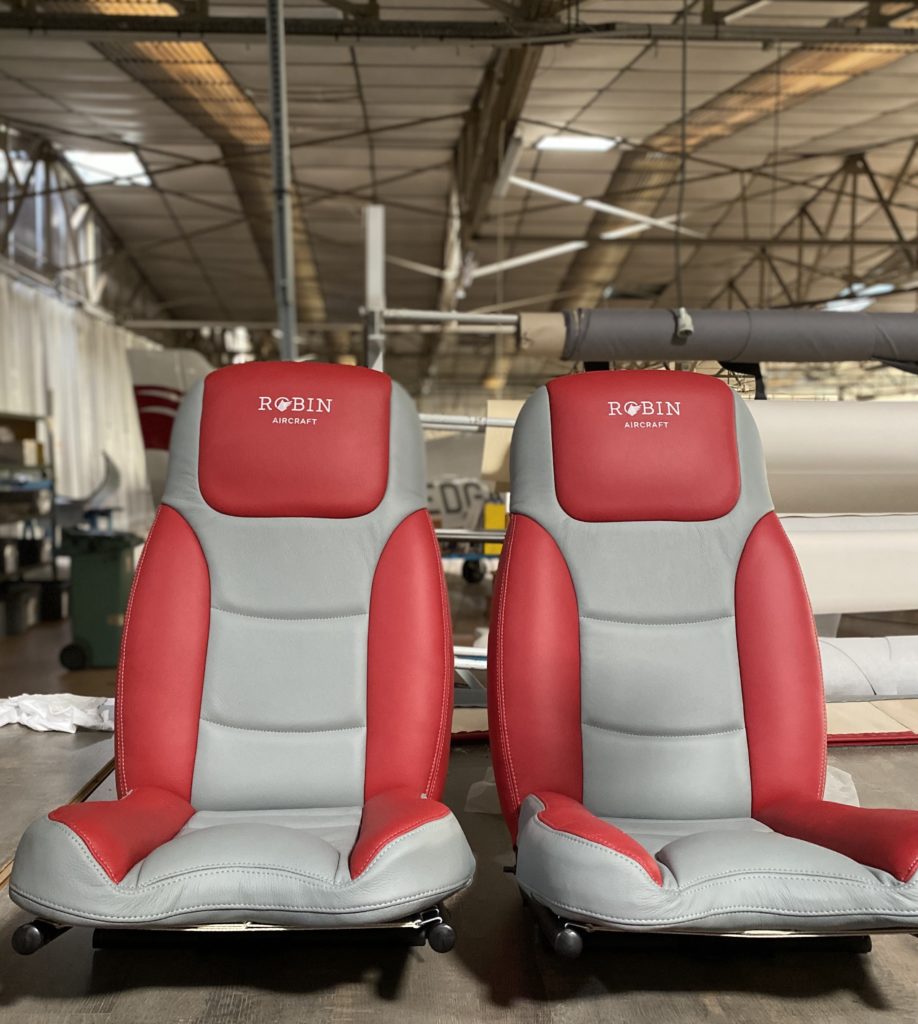 « But I really, really got my kick with the new seat from the… fancy to see it? » says Daniel when we’re about to leave. Do we want to see?

Leaving his tables, Daniel leads us all the way to the other side of the huge assembly workshop that one would call an « open space » if one was not french. French is exactly what is the plane that awaits us at the other end of Robin’s world.

Open hood and open canopy, with its nose proudly aimed at his natural habitat, the last-born of a famous dynasty could almost be mistaken for a fighter. We could swear we’ve seen it take off in the middle of the pacific a hundred times. But it’s no fighter, its a CAP10. He only fights gravity. 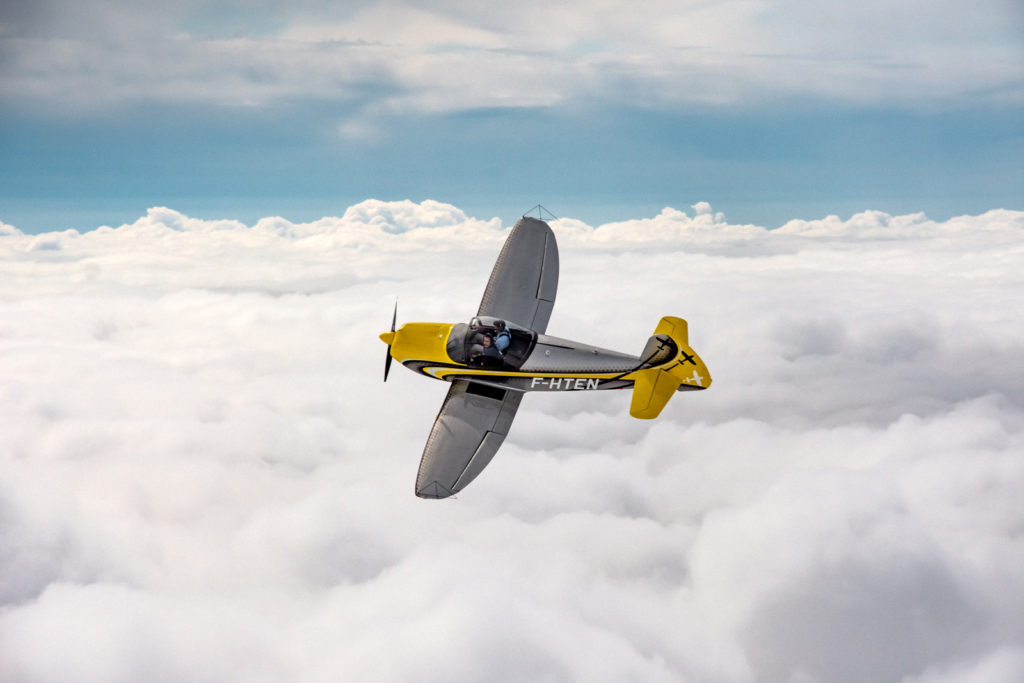 His reputation precedes him, but his looks are quite avant-garde. A lemon-yellow and a metal-grey color the hive-like paint job. Audacious.

And inside, Daniel’s seats.

He first explains that aerobatic pilots don’t care much for confort. They’s much rather have parachutes than stuffing in their seats. Reckless as they may be, they don’t intend to kick the bucket anytime soon. Therefore, they prefer simple bucket-seats in their aircraft.

But Daniel nevertheless, didn’t leave his creativity along with the foam on the shelves. Having carte blanche, he designed a thick vintage black leather cover which he padded with yellow thread to reproduce the hive pattern. An elegant way to match the bee-like vivacity of the plane and, of course, the paint job. All in all, it took him two or three days to make those seats. Good, very good job. 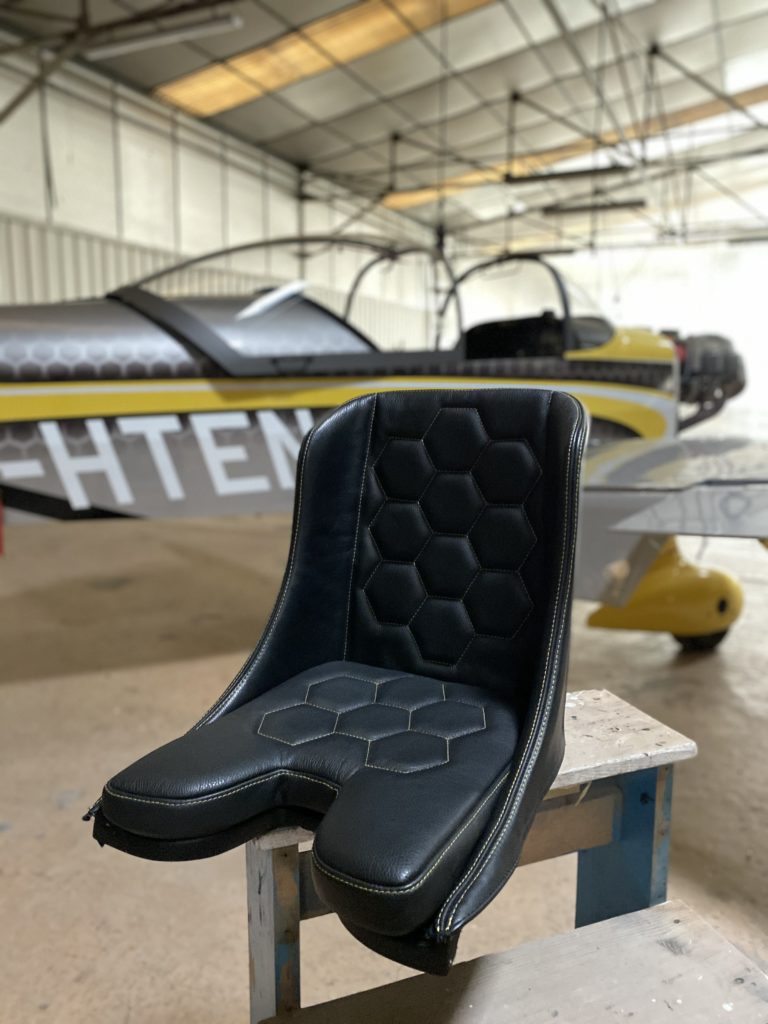 The visit ends beyond working hours but Daniel seizes the opportunity of this very good job to tell us the pleasure he has to work in a constructive and familiar atmosphere. He enjoys working his ass off for the confort of passionate pilots’ asses instead of working for private jet owners with chauffeurs. Which he did, for a few years, before coming back to work for Robin.

Seeing us out, he goes on about having left Robin in 2008 when the company crashed.

He admits he didn’t believe the company could rise up from its ashes again in 2012 and that he finally came to « reason » in 2016 and found his old workshop exactly like it used to be.

Shaking hands with us, he wraps his thoughts up in one sentence: « this company is kind of like my Pfuff: unbreakable ».

Next time, we’ll swing by Daniel’s workshop to say hello, to him and his Pfuff, on the way to the metal workshops, which will be the star of the next episodes of the Robin Saga.