This is where it all begun.
Back then, there was just dirt, weeds, a few trees and a few farms, sprinkled along one single road, connecting Dijon to Troyes, passing by the great nothing that was Darois.
So here we are. Right where was built, in 1957, this half-barrel-shaped hangar that was meant to harbour the efforts of a young pilot to build his own plane. And the great nothing became a great something. This undertaking was actually such an unexpected success that some said Pierre Robin came out of the woodwork.
And wood is precisely what this « half-barrel » has always been about for sixty-three years. And counting…

Today, one could call a village what emerged all around the half-barrel. A craftsman’s village shall we say, for it is the whole chain of fabrication that now surrounds the hangar. But where the Robin Big Bang initially occurred is where every plane is still born every single time nowadays. Where the chosen wood meets Robin for the first time 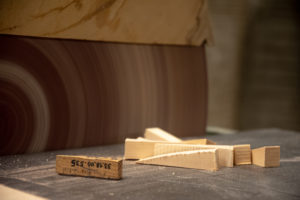 In here, sawdust materializes the comings and goings of masked silhouettes from one machine to the other. One can’t see very far, yet wood still has a long way to go. And so do we.
We are actually in the antechamber of the half-barrel. Here is where the cuts are made. No way to hear or be heard. So let us check the other side of this isolating curtain. 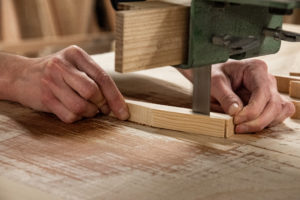 Once in the main working space, the first thing that can be noticed is there’s nothing in the air anymore, except for savoir-faire. There’s not much cutting going on here, mainly sanding down, planing down, bending down and gluing, gluing and gluing down again… Speaking of gluing, the strongest impression is made by the hundreds and hundreds of clamps of all types and age, aligned everywhere in the workshop, always at hand’s reach like knives in a vast kitchen.

But the smell is rather that of a sauna. A smell that fits perfectly the mountain-cabin-atmosphere set by the racks of wing ribs on the wall. One’s imagination could easily associate those with racks of snowshoes left there by successive packs of hikers… 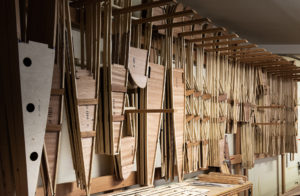 It is true that many men spent a few decades here, leaving traces of their presence everywhere: from the ground up to the ceiling. 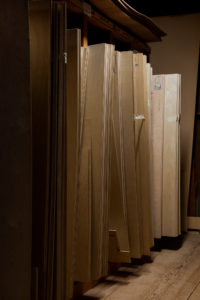 We step inside the stock, next. One should think wood and men enjoy the same temperatures. This is the room where all of it – the wood, not the men – is kept. Once the door is closed, the atmosphere is suddenly peaceful, almost quiet, and the smell of mixed wooden scents is sweetly intoxicating. You could just sit here all day long and think, among all this wood lined up, waiting to meet its glorious destiny.
There’s many different species in here. Because the structure of a DR401 or that of a CAP10 consists of many. Each species is used according to its place in the structure. This strict equation between robustness, weight and elasticity is what Yannick, the workshop foreman, calls « hunting for grammes ».
One could make a plane solely out of birch, but would find oneself only able to taxi around the tarmac. Or one could want an ultra-light pinewood plane, but would probably end up in an overcoat of the same fabric as Americans usually put it…
So, yes, one would definitely be advised to use measure. 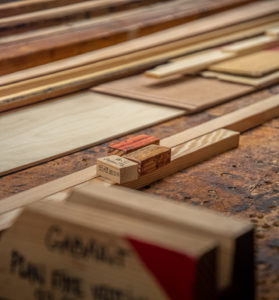 Well as it happens, our woodworkers specialise in it. They work the way nature itself works as Christophe puts it. Christophe has been here for eighteen months but seems to be getting the point already: a Robin is a mise en abyme, which basically means a story within a story. Wood naturally consists of superimposed layers, alternatively thick and soft, according to the number of winters and springs the tree has gone through before being cut down.
Following the same logic, our woodworkers assemble the plane as a patchwork of different woods so as to get the best possible ratio in terms of solidity, longevity and lightness.
Of course, the technical instructions are meant to be consulted regularly. But the thing every woodworker trusts most is his eyes and hands. No instruction could replace their intimate knowledge of this lively, noble material. 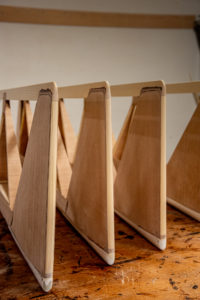 The process of fabricating a wing actually depends mostly on the worker’s own appreciation of curves.
Christophe, again, puts a perspective on that topic: he considers curves to be exclusive to the human hand as opposed to machines. The current trend of angular, sharp-edged objects that furnish many homes nowadays can be explained as follows: to sell massively, you have to produce massively, and to produce massively, machines are unmatchable when it comes to cutting angles and squares and rectangles… So, yes, curving is unmistakably the signature of hand-craftsmanship. To be precise, curves are what make the craftsman proud.

Axelle looks up from her work when she hears « proud ». She’s not even thirty yet, but already a well-known figure. That’s exactly how she feels about being part of the big adventure of making mankind fly: proud. But she also feels responsible. Responsible for the savoir-faire that’s entrusted to her. Responsible for the lives of those who will soon be borne by the very wing she’s sanding down as we speak. That constant acknowledgment of high stakes might be the reason why the atmosphere is so infused with solemnity.
It would be hard not to agree making aircrafts is a serious matter. All the more when it is made of wood. Because wood is a lively matter. Every inch of it must be taken for what it actually is and not for what the others were.
There mustn’t be one too many wood chip on the floor, not a single millimeter left to chance. It seems there’s no room for those of the « good-enough » persuasion. 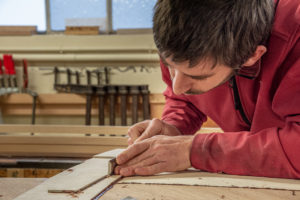 And for those of the « simply-right » persuasion – that is for all of those carpenters around us – their trust in their own judgement is key to the everyday fluidity of work. But that trust must naturally be channeled within a tight organisation, collectively and individually.

The best example of this principle could be Antoine who specialized, the last two years, in horizontal stabilizers among other things.

Antoine used to be a loyal sous-chef to a very well-known french chef. And we can’t help but notice that the rigorous set up of his tools is typically that of a thoroughly trained cook. As a craftsman, he approaches his work here as he did back in the kitchen, stricly following the chef’s recipe whilst constantly adapting to matter. After all, the wood he slices is just another one of many forms of life, as are meats, herbs, fishes or vegetables. But the point is not to season, it is to bind pieces with glue instead of sauce. And even though what Antoine delivers is always rare – due a rare kind of know-how, that is – it is however subdued to incompressible « cooking » times. His work regularly has to be left alone to soak, dry or slowly bend. 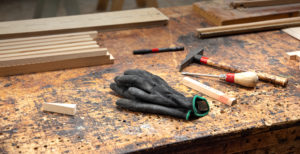 So it is then very clear that for every single one of the thousands of operation that take place in the workshop, there is a recipe. And to compile those thousands of recipes, there is Claire, right next to Antoine.
Different path, different personality, same approach. Claire used to be a landscape architect. It’s safe to say she has not only logic and vision to her credit but also the art of synthesis. So in addition to her providing the fuselage with all kinds of complicated wooden parts, she also uses her specific skills and sharp drawing to lay the know-how down. In other words, she facilitates the knowledge-transfer between generations. And that is a primordial mission. For the Robin savoir-faire, a vast sum of experiences and competences, is one of ever-changing nature.
Though all the DR-400 might look the same from a distance, they are never two of the exact same kind. And that is not only on account of wood being a lively matter: fabrication methods change constantly, along with the planes, in a parallel progression towards excellence. Claire’s most valuable contribution to Robin is therefore to put all this on paper and above all to keep it up to date for the next generation to pick it up and make it better and better, until the another generation takes over. 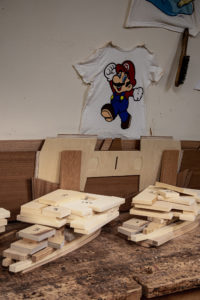 And you know, now that we think about it, now that we’ve taken a close look at the workshop, it appears the next generation is actually already here. Compared to a few years ago, when we last visited, the change is really obvious: the average age plummeted from forty to thirty.
And speaking of forty, that’s just about how many years Norbert has been around. Forty-two exactly. No wonder why his post is so close to Claire’s… Because Norbert, once a youngster amongst old-timers, is now the « dean ». He’s one of the last Mohawks, one of those who loyally went through decades of Robin’s rocky history. When he’ll be deservedly retired, the workshop will enter a new cycle for good, entrusted to an entirely new set of minds and hands. A new generation of Robinites. A gifted, innovative and engaged generation, without a doubt. But also a more restless one, shaped by their time, the world they live in, a world that can’t help but be in a hurry apparently.

So the question is: among all of them, how many Norberts?

That sounds like the main task at Robin’s as far as the 20’s are concerned: finding more and more young talents with a personality strong enough to carry the Robin heritage further and higher.
Every single one of the woodworkers we met today, including Norbert, basically told us the same thing: « got here by chance, stayed here by choice ».
So it looks like it all comes down to nature again, inspiration wise. Maybe for every « home-grown-woodworker » lost to retirement, Robin will have to grow two others in its spot and cultivate them, make them blossom to make them want to last.

Generations come and go, but Robin will always be Robin. 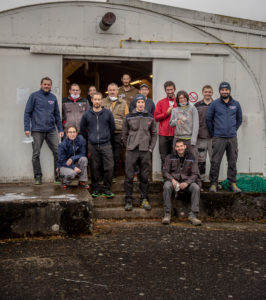