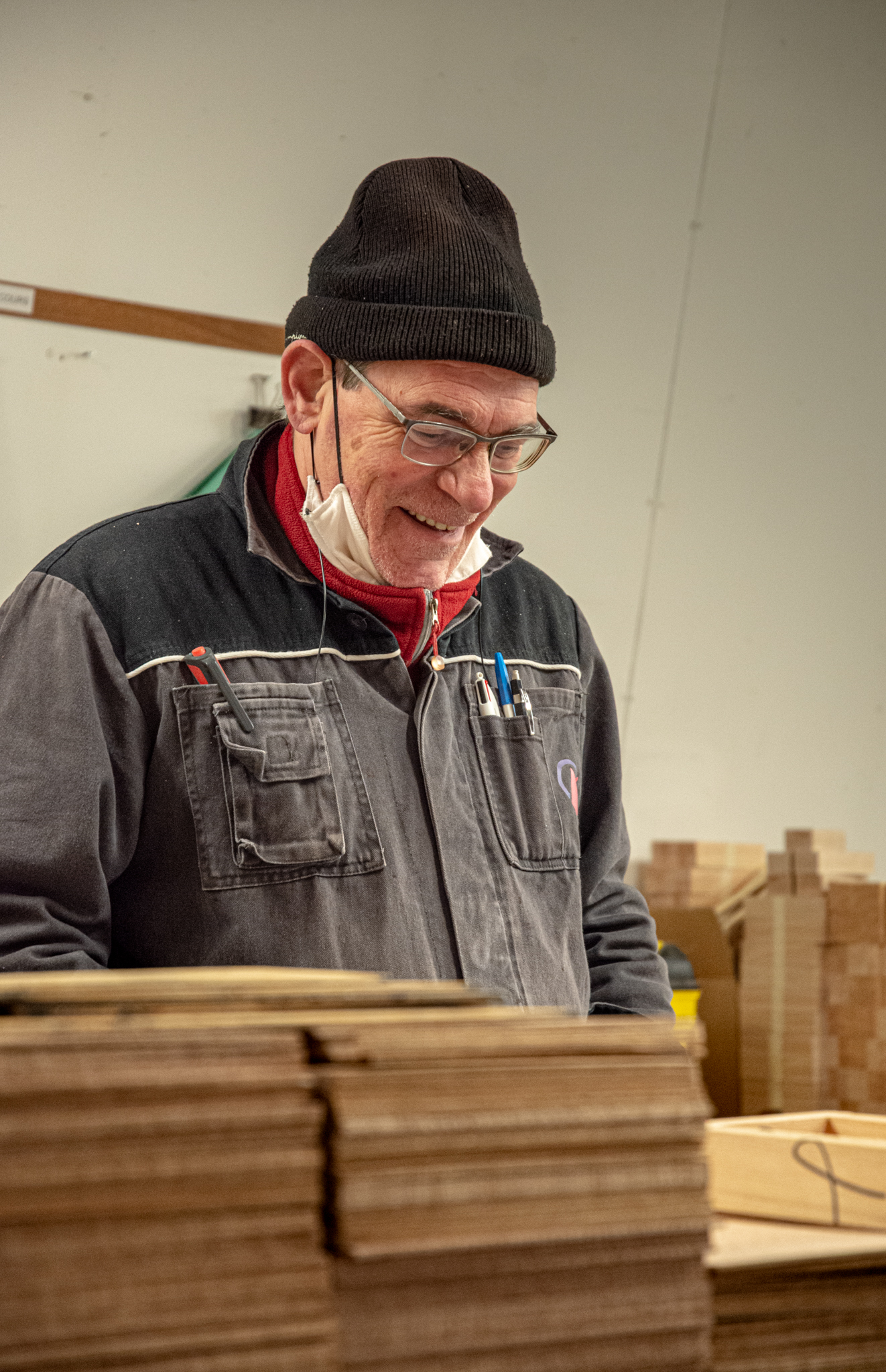 Nobody knows Norbert, but everybody knows Nono. It’s been this way since 1978. In 2020, the wood workshop is home to him. More than that, he’s « part of the home furniture » as we say in french, meaning that at some point you don’t even notice anymore what’s most vital to a place because it’s always been there.
So it’s fair to say when we get to the workshop to borrow him for an hour, it feels like borrowing the diner table from the dining room. We actually borrow him from Patrick, an old acquaintance from primary school that just landed the workshop and whom Nono recently recognized, fifty years later…

Peaceful, kind of here and elsewhere at the same time, Nono is not the chatterbox type. He never uses too many words and usually aims straight at the point: « Almost 43 years I’ve been here… Time went by. »

Nono landed in this workshop in ’78 for a six-month-internship. Not an uncommon story around Robin, even these days: one usually shows up by accident and stays by choice.
« I chose wood. It was a good choice. On the first day here, I was afraid, I thought I wouldn’t be able to deliver. It’s not nothing to be responsible for four lives when you’re just a woodworker… Once they’re up there in the air, they’re not gonna park on a cloud if something’s wrong. But my internship went okay. So I signed a contract to come back after the army. I did my twelve months and came back, end of ’79 I think… And here I am. » Then Nono goes silent for a bit.
He does that frequently, it seems he’d rather think, even about something else, than fill the silence with useless words.
And just as we are about to fill in, he picks up his thought: « I was let go with everyone else in 1981 when the first big crisis stroke Robin. And then we all came back a year later when things got better… When I left, there was a big bunch of white planes on the field just outside of here, unpainted aircrafts. Which meant they weren’t sold yet. And when we all came back, the field emptied within a few months. » And there goes the first smile of the interview.

Since those years, Nono tried many things at Robin, including the assembly workshop for two years. He went through every workstation in the wood workshop except one: « oddly enough, I never built a single rear empennage. »
But even more surprising is the fact that he learnt the art of interlining a wing in 2008, when Robin was temporarily closed again. « I was hired for a few months by an airfield workshop to fix a messed-up DR220. I redid the wing and two or three things on the airframe. »
So we’re not sticking our neck out saying Nono knows his stuff: « Even if it changes constantly, a DR is always a DR. Even today, we work the same way we always did, except the paperwork was not such a drag back in the days. »
So nothing changed? « Oh yes, something has changed radically. When I got here, the old-timers taught me everything, I was the only youngster. Now, the old-timer is me! » He laughs a clear laugh and goes on: « The biggest change I’ve seen in 42 years here, is right now. Since two or three years, all the young new-comers that landed here came in with fresh ideas and methods. They’re making the change. In the right direction, I mean. I’m not worried about what’s going to happen after I’m gone. I trust they’ll do fine without me. Plus I think some are going to last here, someday they’ll talk like me: time went by! »

Closer than ever to a well-deserved retirement, Nono is now starting to loosen a bit and shares spontaneously: « Woodwork is a good job, but furniture don’t fly… What I liked most about my work here was that I could often hear it coming from far away, I could look up and say: hey here’s one! Oh and here’s something else: I always thought it strange that there was no school for aeronautical woodworkers. But then, recently, it struck me: since we’re the only ones to build wooden planes, well, it meant I had been to this very school all my life! »

So, the circle is now complete.

When his career is also complete, Nono will retire in Hauteville, where he grew up and lived all his life, just 3 miles away from the workshop, where he watched Robin rock a few times without ever hitting rock bottom.
He will certainly drop by the factory from time to time, to see the new-comers become old-timers. «  Robin, Hauteville, after all, I realize I never left my villages » says he with another laugh before concluding with a sentence that seems to perfectly encapsulate his character: « Almost 43 years I’ve been here…Yeah, well, I would say everything went well. »
So there you have it. Nono in all his glory.